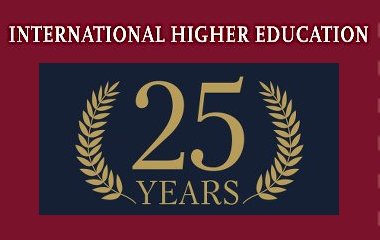 We will be marking IHE's 100th issue by examining the key challenges and possibilities facing higher education as we enter the mid-21st century. Without question, higher education has experienced dramatic change since this publication began in 1995 – and this change accelerated after its special 20th anniversary edition in 2015.

Perhaps what has marked this era in the most fundamental way is the massification of post-secondary education worldwide, combined with the emergence of the global knowledge economy. We have also experienced the development of information technologies, including the internet, artificial intelligence and a myriad of related aspects.

Massification has stimulated the rise of the private sector and the commercialisation of higher education. The global knowledge economy has contributed to the domination of English as the global scientific language, dramatic increases in student and faculty mobility, and internationalisation in all of its forms.

Yet we must acknowledge that in many ways, higher education has failed to meet these challenges. While offering unprecedented access, universities have also contributed to social divisions and inequalities. In many countries, large numbers of students do not complete their degrees, and the cost of studying has greatly increased in most places.

Higher education values are being challenged by increased nationalism and populism worldwide, and there is reduced trust in the value of science – while at the same time, as formulated in the Sustainable Development Goals of the United Nations, higher education and research are called upon to find solutions to global challenges.

While reaching out to experts worldwide for their reflections on the above themes, we would also like to welcome a new generation of scholars to International Higher Education. We are therefore inviting contributions to an essay contest on “Unprecedented Challenges, Significant Possibilities”, key challenges and opportunities for international higher education in the coming decade and beyond.

Participants in the essay contest should submit a blind version of their essay as well as their CV, indicating their current position. Essays should not exceed 800 words, may include up to three references, and should be submitted to highered@bc.edu before 15 August 2019.